comScore: awareness of the iPad high right out of the gate 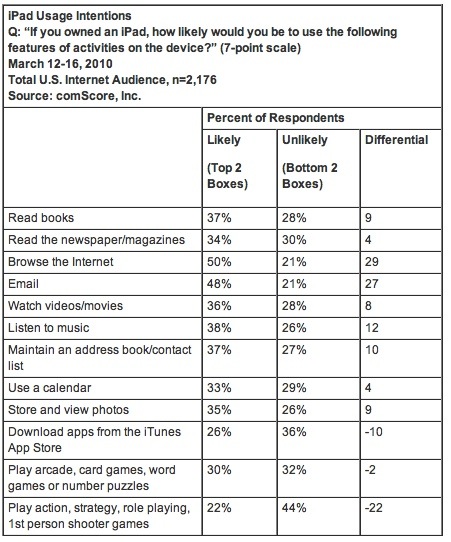 comScore (http://www.comscore.com), which measures the digital world, has released the results of a survey of 2,176 Internet users regarding their awareness, attitudes and opinions of the Apple iPad and other e-readers/tablet devices.

Results were analyzed across age and gender profiles, as well as the “iOwners” consumer segment, defined as those owning either an iPhone or iPod touch.

“The tablet and e-reader market is developing at a breakneck pace right now, and Apple’s entry into the market is sure to accelerate mainstream consumer adoption,” says Serge Matta,
comScore executive vice president. “These devices have the potential to be incredibly disruptive to the way consumers currently access digital content. While only time will tell exactly how consumer behavior will change, our research suggests that not only will a variety of markets be impacted by the introduction of these devices but also that there are substantial opportunities for those in the digital content ecosystem.”

Consumers were asked several questions regarding their awareness of various e-readers and tablet devices and their past purchase behavior or intent to purchase these devices. The results showed very high awareness of the iPad out of the gate, with an aided awareness of 65%, the same as that of the Amazon Kindle e-reader.

Overall, consumers have demonstrated a high level of interest in these types of devices with between 58% and 69% of consumers having conducted online research of the top five devices. Amazon Kindle rated highest in terms of current device ownership at 6% of all Internet users, followed by Sony Reader at %. The iPad rated highest in terms of consumers seriously considering purchase over the next three months at 15% of Internet users, with the Kindle at 14%.

Consumers were also questioned about which features and activities they would be most likely to use if they owned an iPad, with responses indicating that they viewed the iPad differently than a traditional e-reader. Just 37% of respondents indicated they were “likely” or “very likely” to read books on the device, nine percentage points higher than those who indicated they would be “unlikely” or “very unlikely.” Nearly half indicated a high likelihood of using the iPad for browsing the Internet (50%) and email (48%), while more than one-third said they would use it for listening to music (38%), reading books (37%), maintaining an address book/contact list (37%), watching videos/movies (36%), storing and viewing photos (35%) and reading newspapers and magazines (34%).

Results also showed that iOwners exhibited very different characteristics and receptivity to the purchase and use of digital content than non-iOwners. 52% of iOwners said they were willing or very willing to pay for newspaper and magazine subscriptions specially formatted for e-readers, compared to just 22% of non-iOwners. Similarly, 50% of iOwners who also own an e-reader said they had spent at least US$60 on e-books in the past three months compared to only 24% of non-iOwners. These findings suggest that those who are already familiar and comfortable with making digital content purchases via iTunes may have a relatively higher receptivity to making similar purchases for the iPad.

° Male and female survey participants had nearly identical favorability around the choice of the name “iPad” In the case of both genders, approximately 49% had a positive impression of the name, 27% were indifferent, and 24% had a negative impression.

° While ownership of an iPhone or iPod touch was a strong predictor of those who have already ordered an iPad, it was not a strong predictor of purchase intent. 3% of iOwners had already purchased the iPad compared to 1% of non-iOwners, but 15%of each consumer segment indicated an intention to purchase the device in the next three months.

° The most important device attributes that consumers indicated they would like to have included in the iPad were: ability to use multiple applications/programs at once (43%), having a screen the same size as a laptop or desktop computer (37%) and having a built-in camera (34%). Among iOwners, the percentages were substantially higher at 56, 66 and 51%, respectively.

Consumers were asked about whether they would use an iPad “instead of” or “in addition to” other digital devices, and indicated the highest likelihood of substituting for the iPod touch (37%). Despite widespread belief that the iPad might threaten netbook adoption, only 22% of consumers said they would use it instead of the device.

Consumers’ existing carrier service appears to be a significant determinant of purchase intent, with 25% of AT&T Wireless customers who are aware of the iPad saying they intend to purchase the device in the next three months compared to just 10% of Verizon customers.

Younger consumers indicated a high willingness to pay for news and magazines specially formatted for e-readers. 68% of 25-34 year olds and 59% of 35-44 year olds said they were willing to pay for this content, representing substantially higher percentages than people age 45 and older. 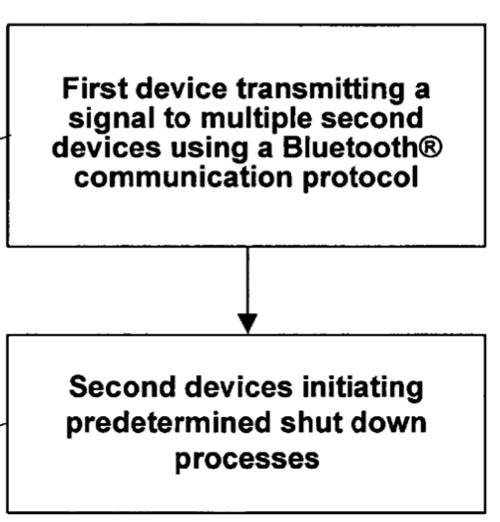