Uniea (http://www.uniea.com) has launched a new line of versatile cases for the iPad. The new cases offer a wide range of different construction materials, features, and colors.

Constructed of lightweight neoprene, the U-Sleaf offers iPad users a sleeve-style case. The wave-shaped flap stays securely closed without the use of zippers or Velcro. Another feature of the U-Sleaf is that it is reversible, giving you two color options for the price of one. The U-Sleaf will be available in a multi-color/chocolate brown version in early April, and will also come in four other reversible colors not long after the release of the iPad.

The U-Skin is a shell case for the iPad that features a smooth yet strong silicone surface that’s designed to be impact-resistant and protects the device from dirt and scratches. In spite of the iPad’s rugged, protective design, the case is quite slim and adds minimal bulk to the iPad, offers full access to ports and switches for the ultimate in mobile computing. Another feature of the case is its particularly shiny silicone surface. The U-Skin will debut in early April in white and black, with candy apple red and neon blue to follow not long after.

The Omniverse case sports an interior memory foam for maximum protection, corner flaps that keep the iPad in place, a stowable tote handle, rugged zippers, and silk or nylon material. The Omniverse will be released in black at the beginning of April, and Uniea will work to release other colors as soon as possible.

These three iPad cases will be available when the iPad makes its debut on April 3. In addition, Uniea is planning the release of two other case designs that should debut not long after the release of the Apple iPad.

For iPad users who want to protect their device without changing its look and feel, there’s the U-Feel. Constructed of impact-resistant plastic, the U-Feel’s surface has the same smooth, sleek texture as the iPad itself, according to the folks at Unia. The top of the case features a rubberized texture for easy gripping and offers full access to critical ports and switches. The U-Feel is planned to feature red, black, and blue color options, or, for users who want to preserve the color of their iPad, clear plastic as well.

The U-Glance shell case is constructed of TPU plastic, which offers both protection and flexibility. While the outside of the case is smooth, the interior features an embossed diamond pattern. When light hits the U-Glance, “it creates an amazing glimmering effect that gives the illusion of shimmering diamonds,” according to the folks at Uniea. 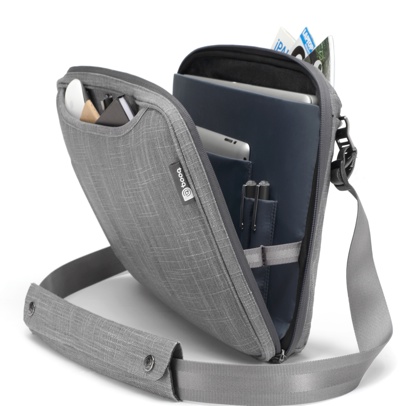