Okay, so the iPad is here—and I want one. It has most of the features I said I wanted in such a device. But I still have a few questions.

First off, it has a 9.7-inch screen, close enough to the 10-incher I was hoping for. It will certainly have all the functionality of my iPod touch with enough notebook features to make me wonder if it can replace my 13-inch MacBook Pro. As I’ve mentioned before, I mainly use my laptop when I’m on the road (visiting Mom, going to Macworld, etc.)

I’m not sure whether I could live with a 10-inch screen for several days, but I’ll be glad to get my hands on an iPad to see how it feels and works as a productivity device. It can obviously handle email, surfing the net, etc. And I’m really excited about the special versions of the iWorks apps that are optimized for the iPad. I do wonder where, for instance, my Pages documents would be saved and how I’d sync everything with my desktop Mac. But I’m sure Apple has the answers. Right, Apple?

The ebook feature sounds very appealing. I’m glad that Apple has revived the iBook moniker though it’s for an iPad app, not for the iPad itself (as I had suggested). The iBook integrates with the new iBookstore, which will offer titles from Penguin, HarperCollins, Simon & Schuster, Macmillan and the Hachette Book Group. This could indeed turn out to be a “Kindle killer.”

I was surprised that Apple didn’t play up the e-magazine and e-newspaper features. I feel this has more potential than the e-book market. And evidently Abilene Christian University does, too, as they’re already planning to publish an iPad version of their student newspaper.

For example, I want digital subscriptions to publications such as “USA Today” and “MacUser UK” and have ‘em magically appear on my iPad when new issues arrive. But I do think this is coming—and sooner rather than later.

Then there are digital versions of textbooks—something else I expect to see Apple promoting. However, this is a double-edged sword. Can’t you imagine being an Apple Education sales rep walking around with these to sell? Schools are already buying the MacBook with iPod touch/iPhone combos for their students. I can see these things eating into the education laptop sales pretty significantly. On the other hand, I also see them eating into the market share for Windows laptops pretty hard, too. And as long as Apple is selling Apple products, maybe Jobs & Company doesn’t care about a certain level of cannibalization.

Okay, now for some random observations (and thanks to J. Scott Alexander for suggesting some of these):

Did you notice that there was no mention of Google? You can see the Google reference on the screen shots. However, do you remember how Apple trumpeted the Google Maps connection when they released the iPhone? It makes me wonder if they are looking to move to Bing, as rumored.

When it comes to Contacts, there’s obviously some use of Spotlight for searching for contacts because there’s a search field. Also, they did say that syncing is over USB, but I wonder why not WiFi syncing to MobileMe? The iPhone does its MobileMe syncing over 3G. WiFi seems to be a natural.

The display looks more like a 4:3 ratio of the old-style TV. Not that they could have done much with it. The 16:9 ratio seems a bit awkward for a tablet. But maybe I’m wrong.

Finally, I’m very surprised that there’s no camera of any sort on the iPad.

That said, I’m dying to get my hands on one. And I’ll go ahead and predict that Apple has another winning product on its hands. 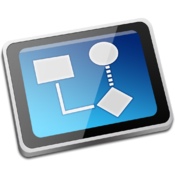