The Henrico County school system is selling 1,000 used iBooks for US$50 at the Richmond International Raceway in Richmond Virginia, when it turned into a “violent stampede,” reports AP. “People threw themselves forward, screaming and pushing each other. A little girl’s stroller was crushed in the stampede. “Witnesses said an elderly man was thrown to the pavement, and someone in a car tried to drive his way through the crowd,” notes the report. “It’s rather strange that we would have such a tremendous response for the purchase of a laptop computer — and laptop computers that probably have less-than- desirable attributes,” said Paul Proto, director of general services for Henrico County. “But I think that people tend to get caught up in the excitement of the event — it almost has an entertainment value.” [Thanks to the many readers who wrote in with this news tip.] 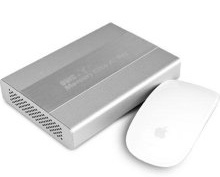