Sony today introduced the world’s first HDV 1080i camcorder. The HDR-FX1 Handycam camcorder records and plays back high definition video with 1080 interlaced lines of resolution — the highest resolution (1440 pixels x 1080 lines) of any consumer camcorder available, according to the press release. The camcorder’s video resolution is enhanced by Sony’s new three-chip, one-megapixel Super HAD CCDs. Sony says that the new 1080i HD CCDs have several improvements, including an on-chip micro-lens on top of the CCD sensor that increases the light focusing rate for focusing on the fly. There is also a newly developed 16:9 aspect mode for recording in widescreen. The HDR-FX1 camcorder will be available in November for about US$3,700. 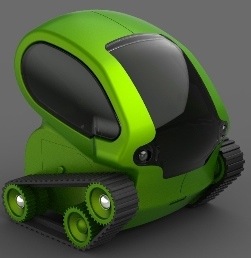 TankBot can be controlled by iOS device