The IEEE standards body has approved a new wireless standard, IEEE 802.11g, that operates in the 2.4GHz waveband and provides speeds of up to 54mbps, according to ZDNet. Another wireless LAN standard that was previously approved, IEEE 802.11a, also provides speeds of up to 54mbps but operates in the 5GHz waveband. Industry analysts expect 802.11a to take the leading role in next-generation wireless LAN devices due to its earlier arrival and backwards compatibility with existing 802.11b (AirPort) devices. 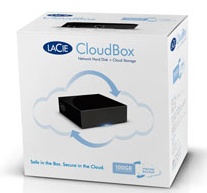 LaCie floats out the CloudBox