New Version Brings Advanced Digital Media to the Internet; QuickTime
Enables Access to the Vast Majority of Digital Media Content on Internet;
New Plug-in to be Available Simultaneously on Windows and Mac OS

INTERNET WORLD EXPO, CHICAGO–July 23, 1997–Apple Computer, Inc. today
announced the QuickTime Plug-in version 2.0 for Microsoft Internet Explorer
and Netscape Navigator and Communicator. Slated for release in the fall of
1997, the plug-in will bring the advanced digital media capabilities of
QuickTime 3.0 to the Internet including QuickTime VR 2.0 support, the
ability to play alternate movie tracks, hotspots, and URL linking. The
QuickTime Plug-in is planned to support most popular file formats, so that
users can have a wide and rich experience with digital media content on
Internet websites. The QuickTime Plug-in 2.0 is planned to be available
simultaneously on Windows 95, Windows NT, and Mac OS, and will be available
for download over the Internet from Apple’s website,
http://quicktime.apple.com.

“The QuickTime Plug-in 2.0 gives Internet users access to the vast majority
of the digital media content on the Internet” said Carolyn Goates,
QuickTime for Internet product manager. “For the user that means a
significantly enhanced interactive experience on the Web, and for the web
designer, it means greater flexibility in creating new, more dynamic
Internet content. By extending these multimedia capabilities and by
providing a one-stop-shop for the translation and access of digital
content, the new version of the QuickTime Plug-in further strengthens
QuickTime’s position as the industry standard for multimedia on the
Internet.”

QuickTime Plug-in 2.0 Fully Cross Platform With the new QuickTime Plug-in,
Apple intends to deliver on its commitment to simultaneously release
identically featured versions of QuickTime across Windows 95, Windows NT,
and Mac OS, when the Plug-in is introduction this fall. The Plug-in is
planned to work with Microsoft Internet Explorer for Macintosh version 2.0
and later, Microsoft Internet Explorer for Windows 95 and Windows NT
version 3.0 and later, Netscape Navigator 2.0 and later, and Netscape
Communicator 4.0. Each shares a consistent interface and features for
accessing Internet multimedia content.

QuickTime Provides Access to Major Digital Media Formats The Internet
contains many digital media types, including video, audio, still images, VR
(virtual reality), 3D, and text. For the user, the job of picking the right
Internet plug-in or application to play back the myriad of available
content can be time-consuming and frustrating. With the QuickTime Plug-in,
the job of viewing and playing back disparate media types over the Internet
is dramatically simplified.

New Features for Web Users The QuickTime Plug-in 2.0 will also integrate
with QuickTime VR 2.0, another technology advance that is tailor-made for
Internet use. With QuickTime VR, the user can experience “virtual reality”
on their own computer without the need for an expensive high-powered
graphics workstation. Users can navigate anything from panoramic views to
museum tours to the surface of Mars, zooming in on details along the way
and experiencing three hundred sixty degree panoramas and objects. Viewers
experience space as if they were actually there, controlling their view by
moving left, right, up, down, and zooming in and out. With the new
QuickTime enhancements, users can now “fast start” VR movies, allowing them
to navigate around a VR movie even as it is still downloading from the
Internet.

New Features for Web Designers QuickTime 3.0 and the QuickTime Plug-in 2.0
are planned to allow web designers to create alternate versions of
QuickTime content in a single movie, which can include variations of data
rates, compression formats, languages, and sizes of windows. This means
that whether a user is viewing a QuickTime movie over a T-1 line or over a
28kb modem, the Plug-in will automatically choose the most appropriate
version of the movie for them, optimizing the interactivity of their
Internet experience. In addition, the Plug-in is planned to have the
ability to select language-based alternate tracks, meaning a Web designer
could create a single compelling Internet experience for a worldwide
audience, instead of having to repurpose it for every international market.

The new version is also planned to allow QuickTime movies to be stored
across multiple files or multiple sites and can even redirect file-based
references. Web designers could connect QuickTime content to CD-ROMs,
intranets, other areas of their website or related sites on the Internet.
For example, this new feature would allow a movie, downloaded from the web,
to reference media data on the user’s local hard disk or CD-ROM. If the
data isn’t present on the local machine, then the Plug-in would convert the
reference into the related URL and load the data from the web. This allows
content developers to create hybrid CD/Internet experiences that extend the
reach of their content.

Another planned new feature is the poster frame preview. This would allow a
web designer to embed a preview image for the movie, minimizing the
download time otherwise required. When the user clicks on the preview
image, the full length movie is then downloaded, appearing in exactly the
same space within that same web page. Multiple poster frames can be placed
on a page, representing each of the corresponding movies that a user can
access, all without ever leaving the original web page. The end result is a
simplified web interface for the web designer and a better, less confusing
experience for the end user.

QuickTime on the Internet Leading websites such as MTV, BMW, CNN use
QuickTime to make their websites compelling and interactive. Recently,
QuickTime has even been used to bring news and events almost immediately to
the Web, testifying to the quick development cycles for QuickTime content
on several news websites. Recent examples include websites dedicated to
diverse events such as The Masters Golf tournament, The British General
Election and the Mars Pathfinder Landing–all of which utilize QuickTime
technology. 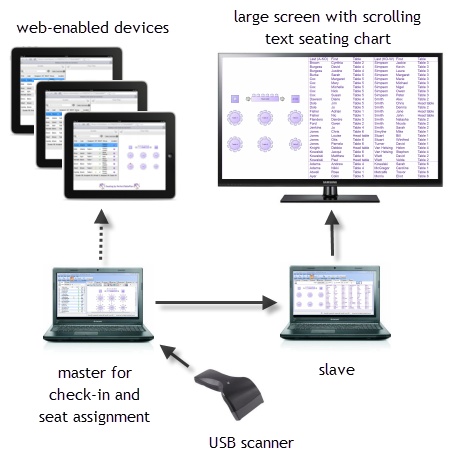 PerfectTablePlan for Mac revved to version 5