From time to time, users need to follow certain steps to deal with a corrupted app or data. The steps below are intended to help users like you. It’s important not to skip steps as they are often the difference between this being effective, and not.

The MacTech Magazine app on iPad does not show up as an app standing on its own. It is, instead, an app that you find on the iOS Newsstand. Don’t know where that is? No problem. Here are the steps to get there. 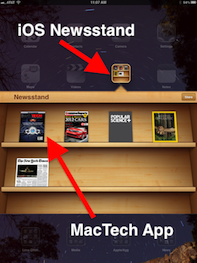 Closing the MacTech Magazine app on the iPad

It’s not always obvious on iOS whether apps are running or not. The way you can tell is by seeing if the app is shown in the multi-tasking dock (when you double tap on the home button). Sometimes just deactivating and reactivating the app is enough, but other times, you need to full quit the app and re-launch. These are the steps.