Some Speed You Can’t Stopwatch

MacTech’s tests are primarily done using a stopwatch, and as such, they are timing things that are done solely by the computer. This is a good judge of the difference between Office 2011 vs. 2008/4. In addition to stopwatch speed, Office 2011 has streamlined the steps for many activities. For example, as we mentioned, charting in Excel takes fewer steps than both 2008 and 2004. WordArt is another example. And the list goes on.

All of these items give users a great deal more “user speed”…and those are not the type of things that can be measured with a stopwatch. However, in many cases, you will see significant “user speed” improvements, regardless.

It’s difficult to make broad statements on how much faster an application is overall, but it’s what you likely want to know. To satisfy that, MacTech has taken a series of test results, and used a center weighted average to give you an idea of how much faster these applications are. See Table 1. 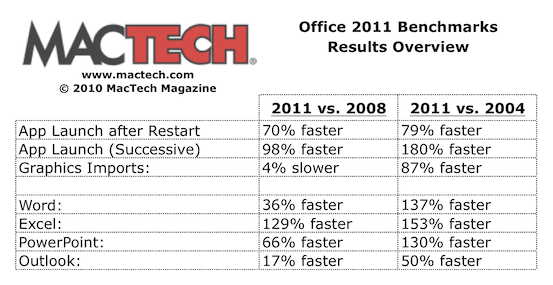 Neil is the Editor-in-Chief and Publisher of MacTech Magazine. Neil has been in the Mac industry since 1985, has developed software, written documentation and has been heading up the magazine since 1992. When Neil writes a review, he likes to put solutions into a real-life scenario and then write about that experience from the user point of view. That said, Neil has a reputation around the office for pushing software to its limits and crashing software/finding bugs. Drop him a line at publisher at mactech.com