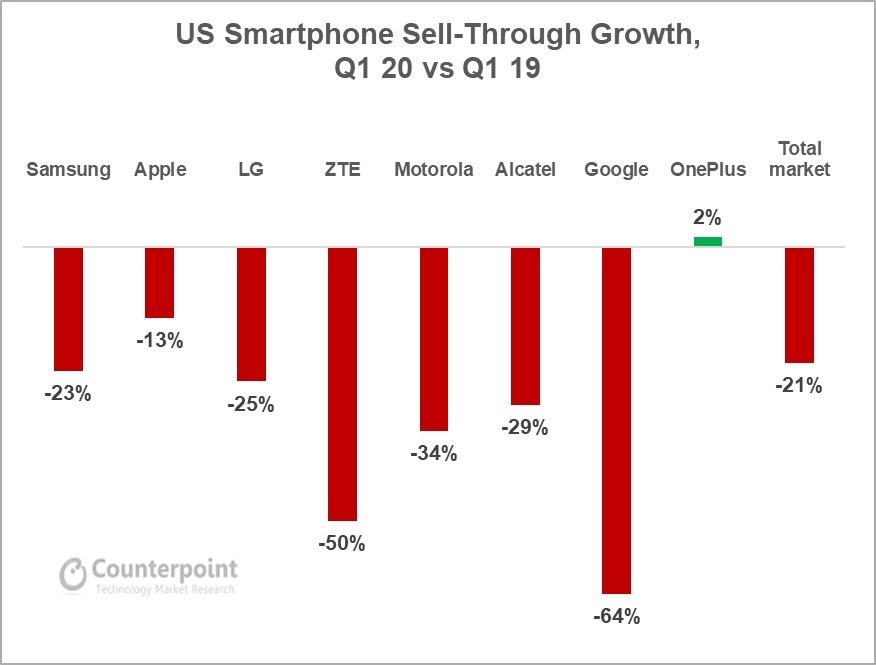 Quarter one of 2020 saw a 21% year-over-year (YoY) decline in smartphone sales driven by store closures and stay-at-home orders in the latter part of the quarter, according to Counterpoint Research‘s latest US Channel Share Tracker.

“In Q1 we began seeing impacts on smartphone supply in February and early March due to Chinese factory closures due to COVID-19. Manufacturers with factories located in Wuhan were affected the most,” Research Director Jeff Fieldhack said. “A late tax season bump saw a sales increase for prepaid devices in late February, but supply shortages limited this growth. In mid-March, demand plummeted due to COVID-19. States began to issue stay-at-home orders and both carriers and national retailers closed stores, restricted foot traffic and offered curb-side pick-up in only a few cases. Around 70% of postpaid stores closed in March leading to a steep decline in smartphone sales for the last month of the quarter.”

Research Analyst Maurice Klaehne noted that, though Apple’s physical stores also closed in March and demand shifted to online channels, iPhone sales only declined 13% year-over-year — much less than almost all other manufacturers.