As the World Wide Web celebrates 29 years of existence, its founder Sir Tim Berners-Lee has expressed his concerns about Internet’s vision as an open platform “that would allow everyone, everywhere to share information, access opportunities and collaborate across geographic and cultural boundaries.”

While last year’s statement was mostly concerned with the lack of Internet privacy and increased government surveillance, this year Sir Tim Berners-Lee mostly spoke about the danger of concentrating all Internet’s power in the hands of a few major companies, such as Google and Facebook. He said:“What was once a rich selection of blogs and websites has been compressed under the powerful weight of a few dominant platforms.”

Therefore, he called for a legal or regulatory framework that would help control these companies whose main objective is profit, resulting in fake news, bots and other outside influences.

His comments come right when government institutions – such as the U.S. Federal Communications Commission (FCC) – are working hard to eliminate existing Internet regulations and to give all controls directly into the hands of Internet Service Providers (ISPs). ISPs – in the same way as Google or Facebook – are also concerned with profits and might start to charge users higher fees in order to access some websites. As a result, the variety of websites would also suffer, as smaller sites would not be able to afford the “fast lane of the Internet.”

In the EU, net neutrality rules are in force, but some countries take them less seriously than others.  In Portugal, for example, Internet providers are taking advantage of net neutrality loopholes and splitting the Internet usage into bundles. The Lisbon-based ISP MEO has rolled out mobile usage packages that provide data plans limited to specific apps. If a user downloads apps that are not included in their package, they will be charged more for that data.

“Apps that are included in such data bundles are at a huge advantage over other companies – and usually smaller companies and startups will not be able to compete,” said Marty P. Kamden, CMO of NordVPN. “Net neutrality is a regulation that is needed to keep the Internet free from profit-seeking Internet service providers. In the same way, Google and Facebook also need to be regulated to prevent their profit-seeking actions (such as spreading of the fake news thanks to paying advertisers) over those that would really benefit users.”

While it’s harder to avoid the dominance of Google and Facebook, Internet users can still do something in order to bypass selective throttling and censorship by using a VPN. VPN encrypts Internet traffic and routes it through an alternative tunnel, making ISPs unable to see what webpage a user is trying to access. Therefore, connecting to a VPN server will help preserve the same speeds of all websites.

At the same time, avoiding Internet censorship has been one of the main functions of VPNs. A VPN allows to easily jump between countries with a click of a button. For example, if Facebook is blocked in Vietnam, an Internet user in Vietnam can connect to a VPN server in France and access Facebook as if they physically were in France. If U.S. ISPs block certain websites, Internet users will be easily able to connect to other countries, where these sites will be available.

To find out more about NordVPN, please visit nordvpn.com. 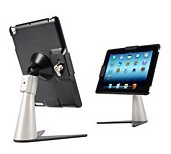 IPEVO Perch Security Stand for the iPad is available