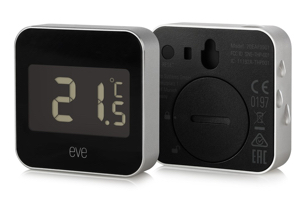 The Eve app stores and visualizes current and past climate data through graphs that facilitate precise climate monitoring, which is especially beneficial to functional spaces such as green houses or wine cellars. What’s more, thanks to Bluetooth low energy technology, power is derived from a replaceable battery while direct communication with your iOS device means there’s no need for a bridge or gateway.

If a fourth-generation Apple TV is present as a Home Hub, Eve Degree will automatically trigger scenes, such us turning on a fan when a specific temperature is reached, or activating a humidifier if the air becomes too dry. The free Eve app stores temperature, humidity and air pressure measurements, visualizes them as graphs, and offers advanced data analysis and export functionality.