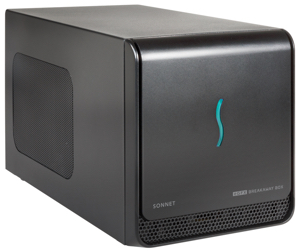 Sonnet Technologies has announced the eGFX Breakaway Box (http://tinyurl.com/y73krnlq), a Thunderbolt 3-to-PCI Express (PCIe) expansion chassis with a single slot for connecting any size Thunderbolt-compatible PCIe card, including high-performance graphics (GPU) cards to a Thunderbolt 3-equipped computer.
The eGFX Breakaway Box is designed specifically for gamers and professionals who need to run bandwidth-intensive graphics applications on their eGFX-compatible notebook, all-in-one, or other small-form-factor computers, according to Sonnet CEO Robert Farnsworth. The company’s goal is to provide the quietest GPU card enclosure that is both affordable and supports the most popular graphics cards, he added.

Additionally, the eGFX Breakaway Box is Thunderbolt-certified for both Mac and Windows, enabling customers with PCIe cards such as the RED ROCKET-X and Avid Pro Tools | HDX to benefit from using this enclosure. With the eGFX Breakaway Box, smaller and lighter general-purpose computers become viable gaming alternatives to larger and more expensive gaming laptops, which are typically thick and heavy because of the built-in GPU and extra cooling required, according to Farnsworth. Professional users can also harness the computational capabilities of the externally attached GPU via OpenCL and CUDA using Thunderbolt-equipped computers.

Each eGFX Breakaway Box model is equipped with a 40Gbps Thunderbolt 3 port that enables data transfers up to 2,750 MB/s, and supports popular GPU cards such as AMD Radeon R and RX series, and the NVIDIA GeForce GTX 9 and 10 series. The Breakaway Box is the quietest eGFX box on the market and works with any Thunderbolt 3-compatible PCIe card regardless of length, says Farnsworth.