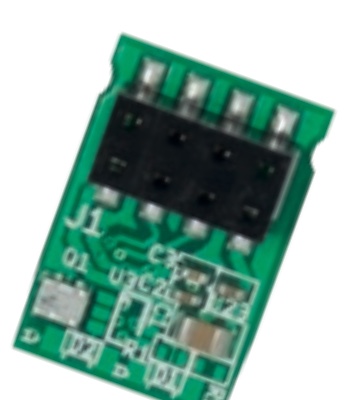 Wibu-Systems’ (www.wibu.com) CmStick/CM is the newcomer to CodeMeter’s hardware element family for secure key storage. It comes in a futuristic design that’s slim and compact.

It sports a USB 3.1 interface, which comes in handy for data exchange between the flash memory and the computer the unit is plugged into. It boasts high speed flash storage memory (initially 8 GB, larger capacities in development), based on 2-Bit Multi-Layer Cell (MLC) technology. There’s an optional encrypted partition of the flash memory (CmSecureDisk) where software produced data or machine configuration data can be securely read and written after successful authentication via CodeMeter API [application programming interface].

However, what makes CmStick/CM stand out as the smallest dongle with flash memory in the world is its high-tech manufacturing technology called SiP (System in Package). The power of SiP technology lies in its ability to bring together many IC and package assembly and testing techniques to create highly integrated products with optimized cost, size, and performance.

This module creates a seamless union between the USB connector and the body of the dongle; the connector is no longer subject to bending, vibration, humidity, or temperature shocks; it is part of the housing itself, which makes the stick highly recommended for rugged industrial contexts. What’s more, the metal case can be personalized with the client’s logo.

Samples of CmStick/CM will be available at Hannover Messe — the trade show that runs April 24-28, where Wibu-Systems is exhibiting in hall 8, booth D05.