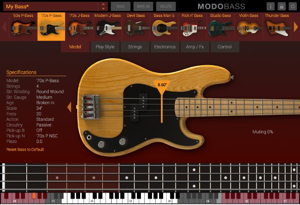 IK Multimedia (http://www.ikmultimedia.com) has released MODO BASS, a customizable physically modeled virtual bass instrument that recreates the sound of the electric bass and how it’s played in real time — from all of the physical instrument components, the human technique of how the instrument is played, to the entire sound signal chain with effects and amplifiers.

Unlike traditional sample-based virtual instruments, MODO BASS — which macOS and Windows compatible — utilizes modal synthesis technology and an ultra-optimized sound engine to model each string as a nonlinear resonator. The string’s acoustic behavior is determined by its physical parameters as well as by the interaction of the string with fretboard, body and pick-ups of the instrument.

The action of the player is then modeled as a nonlinear physical interaction with specific areas on the string surface. Then using IK’s cutting edge analog modeling expertise, the amp and effects rig of the electric bass is added to the sound chain.

MODO BASS is available now from the IK Multimedia online store for a special introductory price of $149.99 until Dec. 4. After that date, MODO BASS will be $299.99.