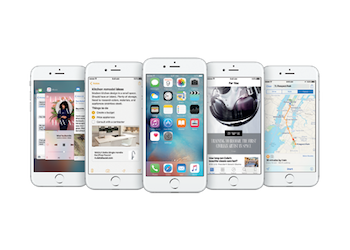 Today, Apple announced that iOS 9 — the mobile operating system for iPhone, iPad and iPod touch — will be available on Wednesday, September 16 as a free update.

iOS 9 has new “multitasking features that let users view and interact with two apps at once, side by side. With Picture-in-Picture, users can play video while browsing the web, composing email or using other apps. Built-in apps become more powerful with a redesigned Notes app offering new ways to capture ideas, detailed transit information in Maps, and an all-new News app for the best news reading experience on any mobile device.”

iOS 9 delivers new multitasking features designed specifically for iPad including: “Slide Over lets you simultaneously work in a second app without leaving the one you’re in and easily switch between your apps. Split View allows you to view and interact with two apps at the same time, side by side, and resize your view to prioritize one app over another. Picture-in-Picture lets you continue a video or FaceTime call while using your favorite apps. Typing is faster and easier with an all-new Shortcut Bar that displays convenient editing tools, and new Multi-Touch gestures make it even easier to select, edit and move text.”

iPhone 4s and later, iPod touch 5th generation and later, iPad 2 and later and iPad mini and later. Some features may not be available in all regions or all languages. For more information visit http://www.apple.com/ios