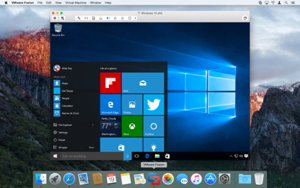 VMware (www.vmware.com) is launching VMware Fusion 8 and Fusion 8 Pro, an update of its software for running Windows applications on a Mac without rebooting.  The former is for home users; the latter is targeted to users with additional needs: developers and Macs in businesses.

VMware says Fusion 8 (and Fusion 8 Pro) takes virtualization on the Mac to the next level with features designed for technical professionals that want to run Windows applications on a Mac without rebooting into Apple’s BootCamp. Version 8 adds support for the latest operating systems, but a main goal of this release is to improve performance — especially in regards to graphics and suspend/resume functions — while maintaining consistency in the main Windows environment.

Fusion 8 (and Pro) adds support for Windows 10 (including Cortana — Microsoft’s answer to Apple’s Siri). It’s also ready for OS X El Capitan, due this fall. Both flavors of the new version support up to 16 virtual CPUs, up to 64GB of RAM, and up to 2GB of video per virtual machine.

Fusion 8 (and Pro) adds support for the latest Mac such as the iMac with 5K Retina, the 12-inch MacBook, and all Macs with Force Touch.

Fusion 8 (and Fusion Pro) packs an enhanced graphics engine that purportedly offers a 65% performance increase with DirectX 10 and a 15% DirectX 9 improvement, and more importantly for many, OpenGL support.

Purchasing Fusion 8 Pro gets you $600 in free vCloud Air service credit to spend up for up to six months. vCloud Air is a public cloud platform built on vSphere from VMware. It has three infrastructure-as-a-service (IaaS) subscription service types: dedicated cloud, virtual private cloud, and disaster recovery.

vSphere is VMware’s cloud computing virtualization operating system. In other words, vCloud Air is a hosted service and vSphere is a managed service.

VMware Fusion and Fusion Pro still aren’t available at the Mac App Store, but that’s no fault of VMware nor any other virtualization vendor. Apple’s rules don’t allow for kernel extensions, and therefore, no virtualization software is available in Apple’s App Store.