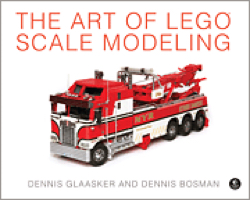 The LEGO scale modeling community brings a miniature world to life with artistry, skill, and patience—a world inhabited by remarkably detailed scale models of real trucks, ships, planes, race cars, and even construction vehicles. Some of these models are so intricate, they’re easy to mistake for the real thing.

In “The Art of LEGO Scale Modeling” from No Starch Press, authors Dennis Glaasker and Dennis Bosman are guides to this unique world. They’re veteran builders, who have been scale modeling with LEGO since the 1970s.

What’s more, Glaasker and Bosman share their own impressive LEGO models as well as highlight models from builders around the world. “The Art of LEGO Scale Modeling” also includes tips and tricks that describe the design and building process.