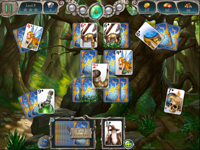 Here’s how the game is described: “The sequel’s story begins shortly after the events of the original game. Having saved King Arthur’s life, the Druids of Avalon have formed a close alliance with Camelot and maintain a permanent presence in Arthur’s court in the form of the Royal Druid, Mallard. A time of peace follows, only to be interrupted by a goblin invasion. With Camelot lying in ruins and Arthur away at war, the player takes on the role of Mallard as he seeks to gather resources and rebuild the kingdom.

“Although the solitaire mechanics stick close to the model established by the first game, Avalon Legends Solitaire 2 introduces a great deal more gameplay in between the levels. By beating solitaire levels, the player earns the three resources needed to rebuild Camelot: Gold, Food and Materials. The player must then choose carefully how to prioritize his reconstruction efforts; the buildings are not merely cosmetic upgrades to the kingdom screen, but provide tangible benefits to the player, producing additional resources, allowing the purchase of power-ups and more.”