According to the latest 451 Research Vendor Window from 451 Research (www.451Research.com), Amazon Web Services (AWS) remains the leader in Infrastructure-as-a-Service (IaaS) adoption among enterprise IT buyers.

These findings are based on responses from over 1,500 global IT professionals, including 1,000 unique vendor evaluations. The 451 Research Vendor Window assessment is based on both overall enterprise adoption rates and customer ratings of vendor performance.

AWS is used by the majority of enterprise IaaS customers in the study (57%) and is also cited as the most important IaaS provider by 35% of these current IaaS customers. Additionally, AWS received some of the highest ratings overall for its ability to fulfill customer needs, particularly in terms of experience and technical innovation. Other important findings from the 451 Research Vendor Window for IaaS include:

° Microsoft Azure has been adopted by 42% of enterprises surveyed and is listed most often as the vendor that enterprises will likely evaluate for their next IaaS supplier. Overall, Microsoft Azure is cited as the most important IaaS provider by 20% of IaaS customers. However, current users of Microsoft Azure rate it lower than other vendors on the metrics of Experience and Support for Open-Source Software.

° Rackspace is on par with AWS for its ability to fulfill customer IaaS needs and is the highest-rated IaaS provider for Guaranteed SLAs, consistent with Rackspace’s new managed cloud positioning.

On-premises private cloud continues to be a major investment for IT organizations, and is often the default cloud environment for many enterprises. Cloud suppliers offering SaaS, IaaS and Hosted Private Cloud solutions are increasingly competing and cooperating with on-premises private cloud environments. Not surprisingly, the 451 Research Vendor Window for On-Premises Private Cloud indicates that VMware dominates with its ESX and vCloud offerings, with adoption by 70% of surveyed enterprises. Additionally VMware and its partner solution, Cisco UCS, received the highest ratings in terms of promise and fulfillment, particularly on the attributes of company brand and platform reliability.

“While VMware’s market dominance continues, and they have excellent ratings from existing customers, the survey results indicate that over 70% of VMware customers have also deployed an alternative cloud platform such as OpenStack, CloudStack or Microsoft Cloud OS,” says Dr. Scott Ottaway, vice president of Cloud Services and Data Research. “As open-source-based solutions continue to receive investment from major hardware and software vendors such as HP, IBM, Red Hat and Citrix, VMware’s dominance is under pressure, especially for mobile and cloud-native applications.”

Other Highlights from the Voice of the Enterprise: Cloud Computing include:

° Hosted Private Cloud is now adopted by 34% of organizations, but it is a highly fragmented market; cloud providers with less than 3% market share account for 52% of all currently used vendors. Rackspace is the number-one vendor in this market with 20% market share, consistent with 451 Research’s Market Monitor Cloud Computing revenue tracking of major cloud service providers. Verizon, CenturyLink, AT&T and VMware vCloud Air are also frequently mentioned providers by existing enterprise customers of hosted private cloud offerings.

° Mission-critical applications are more likely to be deployed on a hosted private cloud than on a multi-tenant IaaS platform, suggesting a long-term growth opportunity for hosted private cloud offerings as mainstream buyers prioritize security, customization and performance over low cost. 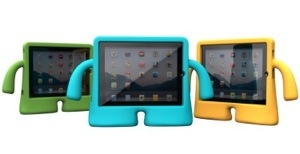 Speck rolls out cases for the iPad 2