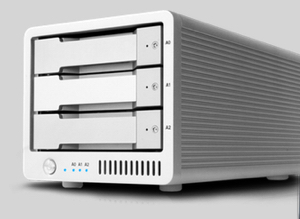 CalDigit (www.caldigit.com) says its T3 Thunderbolt 2 RAID storage solution has now been upgraded to support RAID 5, and is available to pre-order at prices staring at US$499 for a 1.5TB model. It will ship April 20.

However, the T3 offers RAID 5, which means that in the unlikely event of a drive failure all user data is still available and users can carry on working, says Kosta Panagos of CalDigit. This isn’t available on storage solutions that only feature RAID 0. When used in RAID 5 mode the T3 offers the same transfer speeds as a 2-bay RAID 0 device, as well as single-drive redundancy, Panagos says.

Jobs ‘delivering on the digital dream’