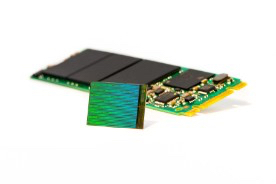 Micron Technology (www.micron.com) and Intel (www.intel.com) have announced the availability of their 3D NAND technology, the world’s highest-density flash memory.

The 256GB MLC version of 3D NAND is sampling with select partners today, and the 384Gb TLC design will be sampling later this spring. The fab production line has already begun initial runs, and both devices will be in full production by the fourth quarter of this year. Both companies are also developing individual lines of SSD solutions based on 3D NAND technology and expect those products to be available within the next year.