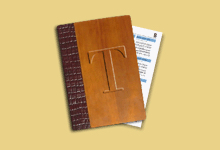 Veenix (http://www.veenix.com) has released Mac OS X Yosemite updates for both of its font software titles, TypeBook Creator and TypeWise.

During Veenix’s “Deep Discount Week,” users can save up to 60% on single user licenses of both products. TypeBook Creator is also specially priced during Deep Discount Week at US$29.95, a $40 savings.

TypeWise is a smart font viewer and manager that helps users find and view fonts and characters. It boasts a fast-scrolling WYSIWYG font list, repertoire and character set layouts, plus Veenix’s GlyphLogicEngine technology which analyzes font characteristics and automatically organizes fonts by visual energy as well as into 16 different standard font classifications. TypeWise is priced at $9.95 during Deep Discount Week.

Hey, Apple, open up a store in my end of town