Apple to save historic barn on ‘spaceship campus’ site 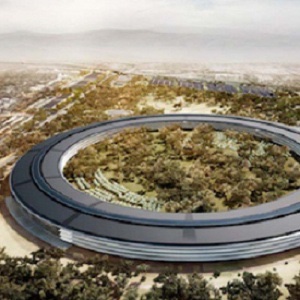 Apple has set aside a place on its “spaceship” campus for the Glendenning Barn, named for a pioneer family whose land “became a magnet for tech companies after the blooms faded from their orchards,” reports the Mercury News (mercurynews.com).

In the years before his death in 2011, Apple co-founder Steve Jobs decided that he wanted to tear up the husk of Hewlett-Packard and bring the land back to its roots, when it was known as the Valley of Heart’s Delight for all its orchards and flowering trees, the article adds. When finished, the 175-acre site off Wolfe and Homestead roads in Cupertino will be transformed from 80% asphalt and concrete to 80% greenery and open space.

The upcoming campus, which will supplement and not replace Apple’s current headquarters at 1 Infinite Loop, was a pet project of the late Jobs. It’s a four-story, 2.8 million square foot building to be built on land formerly occupied by Hewlett Packard’s campus. Originally slated to accommodate 6,000 employees, the plans were revised to designate space for up to 14,000 employees.