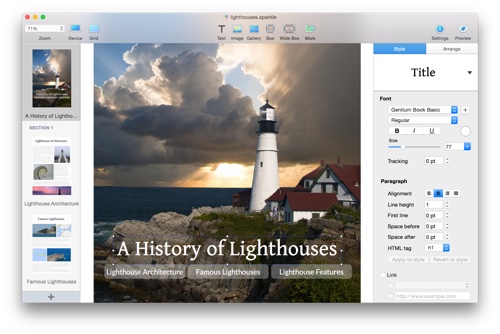 River Design’s Sparkle is a handy website builder for those who prefer to do things visually. The app translates any text and graphic layout to HTML. The app gives Mac users a great to build websites visually.

Sparkle gives Mac users a great way to build website visually, a natural fit for people who don’t think in symbols and don’t want to be constrained by predefined templates. Former iWeb users will find themselves at home with Sparkle, going well beyond what iWeb offered.

Sparkle features include menus, image galleries, maps, social media and more. For example the menu system scales from manual set up to fully automatic with synchronization to the website structure, whereas image galleries not only generate @2x and @3x retina images, but they generate a full set with thumbnails, for each image, for each device. Maps are based on the industry standard ones from Google, Sparkle integrates easy address lookup and a number of preset color schemes.

Sparkle — recently upgraded to version 1.1 — is compatible with Mac OS X 10.9 and higher and is optimized for Yosemite. It’s available at the Mac App Store for US$79.99. It’s a free upgrade for registered users of version 1.0. A free trial limited to three pages is available from its official website (http://sparkle.cx).