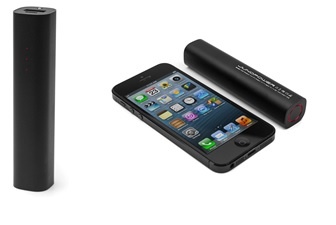 JunoPower has announced the HUE Stick portable battery. It packs 2600 mAh of power in an aluminum casing that weighs six ounces.

The HUE Stick can fully charge a completely dead 5 Volt device (including smart phones, tablets, GPS, camera and more) in two to three hours, according to the folks at JunoPower. It’s integrated LED-indicator lets users know exactly how much juice in the left in the power bank and when it’s time to recharge.  The battery’s built-in LED flashlight can be activated with a single touch and protects users from getting lost in the dark.

The HUE Stick purportedly provides an additional 10 hours of talk time for the iPhone and six hours for the Samsung Galaxy. It’s available on JunoPower.com and Amazon.com for US$21.99.