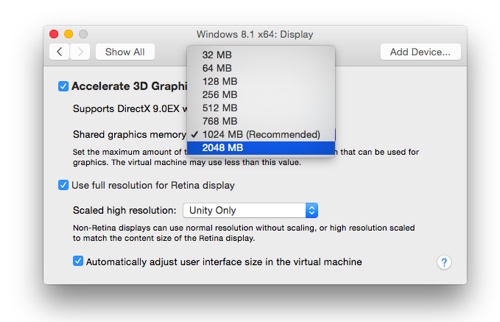 VMware (www.vwmare.com) has released VMware Fusion 7, an update of its desktop virtualization software that’s optimized for the latest Mac hardware and software. VMware is also releasing VMware Fusion 7 Pro with state of the art features for advanced users, developers and Macs in businesses.

“According to a recent Gartner report, Windows still account for over 95% of the operating systems worldwide so we believe many users will likely still need support for Windows applications after moving to a Mac,” says Nicolas Rochard, director of product marketing, End-User Computing, VMware. “As the popularity of Macs continue to climb, Fusion 7 and Fusion 7 Pro are a perfect complement to help users bridge the operating system divide when they switch from Windows PCs to Mac systems.”

VMware Fusion lets you run Windows applications on a Mac. New features in version 7 include:

Powerful Virtual Machines and graphics – Create virtual machines with up to 16 vCPUs, 8 TB virtual disks, and up to 64 GB of memory to run the most demanding applications. Graphics-intensive applications can be given an additional boost by allocating up to 2 GB of video memory per virtual machine.

Designed for the latest Macs – Optimized for the latest Intel Core i5, i7 and Xeon E5 processors, Fusion 7 delivers up to 43% improvements in CPU intensive operations like multimedia, encryption and decryption, and other strenuous performance tests. Leveraging the Mac’s faster memory, faster SSD performance and greater power under the hood, Fusion 7 lets you run Windows applications at near-native performance.

Increased efficiency – Fusion 7 reduces its energy impact on Macs to help users do more on a single charge. Improvements in App Nap support and reduction in Idle Wake Ups ensures that every watt of power coming out of your Mac’s battery is used as efficiently as possible. Fusion 7 shows an energy impact reduction of up to 42% compared to Fusion 6.

Wide OS support– Fusion 7 Pro is designed for OS X Yosemite and fully supports the latest Microsoft operating systems, from Windows 8.1 for the desktop to Windows 2012 R2 for the server. For organizations and technical users that run the latest Linux distribution, Fusion 7 Pro supports Ubuntu 14.04, RHEL 7, CentOS 7, Fedora 20, Debian 8 and many more.

One of the most intriguing new features of VMware Fusion 7 is its Virtual Machine Library feature, which allows a variety of operating systems to be active simultaneously without using all your Mac’s resources. It does this via VMware vSphere services.

vSphere allows IT pros to build their own cloud infrastructure, and virtualize servers on a single platform. With VMware Fusion 7 Pro, users can run virtual machines no the vSphere platform using the server’s pool of resources rather than local dedicated resources of a user’s machine.

Those using virtual machines have the option of running those machines locally (i.e., when not connected to the Internet), or running them from the vSphere server using far less local resources. VMware Fusion Pro 7 ships with a new drag and drop interface to manage these virtual machines as a Mac user would expect.