New data from Parks Associates (www.parksassociates.com) says that nearly 4% of U.S. households will have a smart home controller by the end of 2014, with an estimated increase to nearly 6% by 2015.

The research group’s study, which includes data from a 1Q 2014 survey of 10,000 U.S. broadband households, also reports 64% of all smart devices currently in households operate as part of a security or home controls system. Smart devices include motorized door controls, lighting controls, networked security camera, and programmable thermostats, among other devices.

“The smart home is an emerging market with multiple channels, from service channels to retailers such as Staples and Lowe’s,” says Tom Kerber, director, Research, Home Controls & Energy, Parks Associates. “The majority of smart devices installed today were acquired as part of a security or home controls system deployed by providers such as ADT, Comcast, or AT&T. However, consumers are starting to buy individual products such as smart programmable thermostats and smart smoke detectors in greater numbers and install them as stand-alone devices-but with the expectation that these new devices will interact with all existing and future devices in the home.”

Over one-third (34%) of smart thermostats in U.S. broadband households were purchased stand-alone, the highest percentage among all smart products tested. Honeywell leads this product category, accounting for 25% of all smart thermostats in U.S. homes. GE is the top brand for smart lighting products, but for products such as smart plugs, most consumers simply do not know the brand.

“The Internet of Things is transforming all aspects of business operations, from product management to product development, from logistics to marketing, and from sales to service,” Kerber says. “As more products enter the market, service providers and CE manufacturers in particular will need to reconcile their business strategies in order to deliver the interoperability necessary for the smart home.” 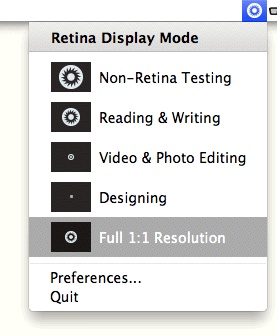 Pupil is new, customizable resolution switcher for the Mac