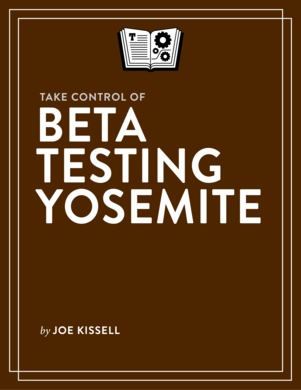 Apple has released the public beta of OS X 10.10 Yosemite! and Take Control Books has published Joe Kissell’s “Take Control of Beta Testing Yosemite.” You can buy it now for a suggested price of $5 from Leanpub (http://tid.bl.it/tco-yosemite-beta-leanpub).

The Yosemite beta is exciting stuff, at least for those of us who love poking around in new software to see what has changed. But the rewards of beta testing come with risks and responsibilities, so in “Take Control of Beta Testing Yosemite,” Kissell draws on years of experience with testing every version of OS X since 10.3 Panther to make sure you know what you’re getting into.

In the 51-page book, Kissell teaches you what’s involved with beta testing in general. He discusses the pros and cons of installing the beta on a startup volume, virtual machine, separate volume, SuperDuper sandbox, or (best of all) a separate Mac. Next up, you’ll run the installer (without letting it delete itself).

With installation completed, Kissell suggests key post-installation tasks and categories of software you may need to reinstall, plus gives tips on how to look for new features and report any bugs you may find. Perhaps most important, he explains how to switch between the beta and your main installation of OS X, how to downgrade from Yosemite if necessary, and how to upgrade to the release version when that ships.