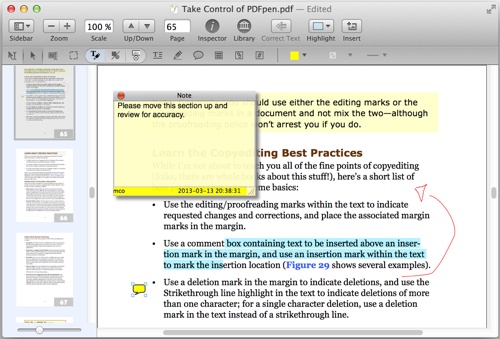 SmileOnMyMac (www.smileonmymac.com) has updated PDFPen, its PDF editing and form-filling tool for Mac OS X, to version 6.1.3. If you haven’t used the software, PDFPen — or its Pro sibling — is certainly worth a look.

PDFpen is a PDF editing tool that allows you to: add text, images, signatures and markup to PDFs; edit and delete text in an original PDF; move, copy, resize and delete images in the original PDF; handle OCR scanned documents; redact or erase text; and fill out and save forms. You can merge pages from several PDF files. Open the files in PDFpen and drag the pages you need from each into a new document.

When it comes to redacting text, you can perform tasks such as removing a Social Security number or banking details. PDFpen removes the text in the PDFpen and replaces it with a black rectangle. You can even use search-and-redact to eliminate the text throughout a PDF document. What’s more, PDFpen is fully scriptable, so you can automate nearly anything you can do in the interface.

It’s designed for anyone who needs more powerful editing capabilities than those offered by Mac OS X’s Preview, but not the full range of printing, collaboration and security tools offered by Adobe Acrobat (which, by the way, costs about seven times as much). PDFpen is popular among publishers, medical and law offices, contractors, and teachers.

PDFpenPro lets you do everything that PDFpen does. Plus, it lets you convert websites into multi-page PDFs, create and edit cross-platform interactive PDF forms, and create and edit a table of contents.

While Preview includes some editing capabilities, it lacks PDFpenʼs ability to perform OCR (Optical Character Recognition), add or correct text, edit images, add signatures, redact sensitive information, or save PDF forms. PDFpen and PDFpenPro have many of the features of Acrobat, although the Adobe product offers several print production features (such as color separations), document identity and collaboration tools that aren’t available in the SmileOnMyMac products.

Version 6.1.3 adds Text-to-Speech support and improves support for VoiceOver and Accessibility in several areas. The changes in PDFpen 6.1.3 have also been made in PDFpenPro 6.1.3, the pro version that can also convert websites into PDFs, automatically create fillable PDF forms, and construct document table of contents. PDFpen 6.1.3 works with PDFpen for iPad and PDFpen for iPhone, allowing editing across devices when used with iCloud or Dropbox storage. Users who wish to use iCloud must purchase PDFpen 6 from the Mac App Store. (Apple restricts iCloud access to applications purchased via the Mac App Store.)

Analyst weighs in on ‘Antennagate,’ lack of a Verizon iPhone