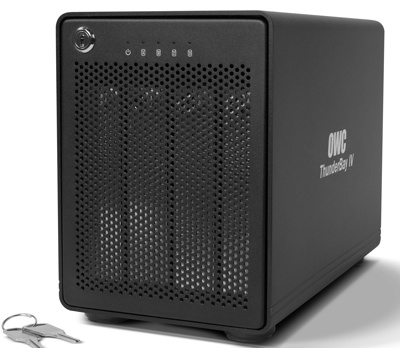 The ThunderBay IV, available in capacities up to 16TB of total storage, adds storage capacity and throughput to any Mac or PC with a Thunderbolt port. Applications such as A/V post-production, photography, music, graphics, data management, and even Time Machine backups are enhanced with access to data at sustained data rates of up to 887MB/s read, 884MB/s write.

The ThunderBay IV supports independent drive access of up to four installed drives, is fully RAID ready, and is designed for RAID 0, 1, and 5 configurations. Even combinations of RAID, individual drive(s) or multiple RAID sets are possible with OWC ThunderBay IV.

ThunderBay’s dual Thunderbolt ports allow daisy chaining of up to five additional devices plus one high-resolution display. Currently, up to 96TB of storage plus a display can be added using the ThunderBay IV solution with any Mac (or PC) via a single available Thunderbolt port.
A durable aluminum enclosure protects the four internal drives and keeps them cool. In addition, the locking faceplate keeps the installed drives secure .

There’s no need to give up the versatility of drive bays when migrating from a Mac Pro tower to the all new Mac Pro. Simply plug in the ThunderBay IV to a Mac Pro and see four drives with a Thunderbolt interface capable of running all drives at full speed as if installed internally.

• Plug & Play ready on any Mac or PC with Thunderbolt interface

The OWC ThunderBay IV is available for immediate ordering from OWC and select retailers in the following configurations:
Add-Your-Own Drive Enclosure Kit $494.99

Go to http://tinyurl.com/n4k8j6s for details.