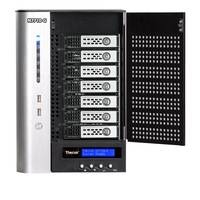 These latest additions to the Thecus line offer improvements in performance thanks to the Intel Pentium G850 Dual Core CPUs, and 10GbE technology. 10GbE networking delivers speeds up to 10x faster than regular gigabit connections, says Florence Shih, general manager of Thecus. Along with the 75% faster (but cooler running) processor, newly incorporated multimedia ports (HDMI and VGA), and the inclusion of USB 3.0 ports, the new 7-bay N7710-G and 8-bay N8810U-G also bring the wealth of the Thecus App Center to SMB businesses, she adds.

The N7710-G and N8810U-G will be available at selected retail stores and distributors in mid-March for the suggested retail prices of US$1,199 and $1,999 respectively. Go to http://tinyurl.com/mdf2f9x for more info.

How to avoid identity theft and fraud