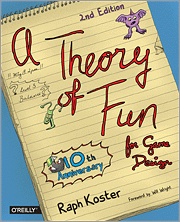 The 10th anniversary edition of “A Theory of Fun for Game Design, 2nd Edition” is now in color, but, as before, it takes readers deep into the influences that underlie modern video games, and examines the elements they share with traditional games such as checkers.

At the heart of his exploration, Raph Koster, author and veteran game designer, takes a close look at the concept of fun and why it’s the most vital element in any game. Topics covered include:

° Games play into our innate ability to seek patterns and solve puzzles.
° Most successful games are built upon the same elements.
° Slightly more females than males now play games.
° Many games still teach primitive survival skills.
° Fictional dressing for modern games is more developed than the conceptual elements.
° Truly creative designers seldom use other games for inspiration.
° Games are beginning to evolve beyond their prehistoric origins.