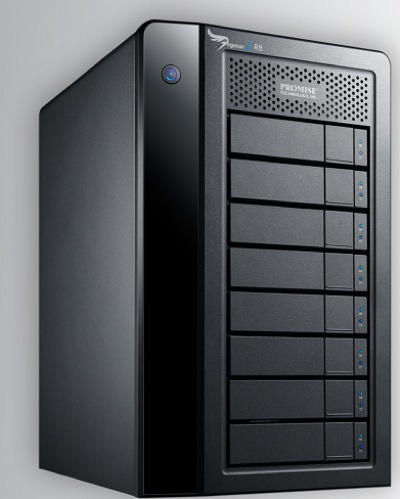 Promise Technology has introduced the Pegasus2 and SANLink2, which it says is the world’s first storage solutions with Thunderbolt 2, the technology from Intel that delivers speeds of 20Gbps.

Running bi-directionally at 20Gbps — twice the 10Gbps bandwidth of Thunderbolt — Thunderbolt 2 is a breakthrough technology for video creators and multimedia professionals allowing for simultaneous transfer and display of high-bandwidth 3D and 4K video files, which often requires 15Gbps.

Pegasus2, an external RAID storage solution, will be available in 4, 6 and 8-bay enclosures, and maximizes the available line rate of Thunderbolt 2 by providing fast transfer speeds for a growing number of 4K applications. With two Thunderbolt 2 ports, six devices can be attached — allowing for daisy chaining of Pegasus enclosure units, Apple Thunderbolt Displays, or Mini DisplayPort devices.

The SANLink2 is a portable device bridge that provides dual 8Gbps Fibre Channel ports and dual 20Gbps Thunderbolt 2 ports and can be used to connect Thunderbolt-enabled systems directly to a high-speed Fibre Channel SAN, such as the Promise VTrak x30 RAID storage system or a VTrak A-Class shared SAN storage appliance for scale out capabilities and real time raw video HD/4K footage ingest, editing, and collaboration.

The Pegasus2 Series is available as a 4-bay, 6-bay or 8-bay RAID enclosure starting in November. It can be purchased from the Apple Online Store (www.apple.com) and through the Promise global network of distributors and value added resellers. The SANLink2 will be available in December. For more info go to www.promise.com/pegasus2 or www.promise.com/SANLink2 .