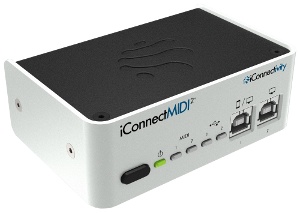 iConnectivity, developer of interfaces for musicians, has released iConnectMIDI2+, their next generation interface for Mac, PC, and iOS. It’s a multi-host interface that features iConnectivity’s multi-hosting and audio passThru technology.

iConnectMIDI2+’s multi-hosting capability allows for more than up to twp computing devices to share the same interface as well as access and share MIDI resources over its two pairs of MIDI DINs and its eight additional user configurable ports. This enables workflow such as, sending MIDI from a controller or synthesizer to DAW and an iOS device simultaneously, setting up redundancy in a live MIDI environment, sending MIDI from multiple computing devices to one another, and more.

As a part of its multi-hosting capabilities iConnectMIDI2+ also features audio passThru. This technology enables two computing devices (Macs, PCs, iOS devices) to not only pass MIDI data but also act as an audio interface between them, bridging each computing device into each other’s audio and MIDI environments. Now a synth running on a user’s iPad. iPod touch, or iPhone could behave as if it were a touch-controlled plug-in running inside a host DAW, Adventurous users can even use their Mac or PC as a slave to their iOS device.

In addition to its expanded connectivity iConnectMIDI2+ includes iConnectivity’s iConfig MIDI manager software for Mac OS X, iOS and Windows. This allows the user complete control over how MIDI is routed, remapped and filtered to and from all devices connected to it.

iConnectMIDI2+ is now available at iConnectivity resellers worldwide. It has a manufacturer’s suggested retail price of US$99.99. Go to www.iConnectivity.com for more info.