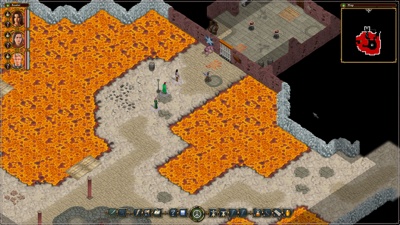 Spiderweb Software says their newest indie, epic length RPG, Avadon 2: The Corruption, will be released on Oct. 30 for Mac and PC users. An iOS version is scheduled for early next year.

Here’s how the game is described: “As a Hand of Avadon, the Black Fortress, you once held unlimited power. Your word was law. Your homeland was united and prospered under the protection of the Black Fortress. Now that fragile alliance has collapsed. Rebellion rages, outside enemies gather, and Avadon lies in ruins. Will you fight to restore your power and bring peace to your realm, or will you join the rebels and forge a new nation? The decision will be yours in Avadon 2: The Corruption.

“Avadon 2: The Corruption is an epic fantasy role-playing adventure in an enormous world. Choose from five different types of characters, including the new Tinkermage class, each with dozens of unique spells or skills. Explore a gigantic world filled with secrets, artifacts, and a rich story. Experience multiple different endings and ultimately choose between saving your homeland or allowing it to fall and make way for something greater.”

The game will be available on Steam; pricing hasn’t been announced. For more info go to http://tinyurl.com/n4hlccb .