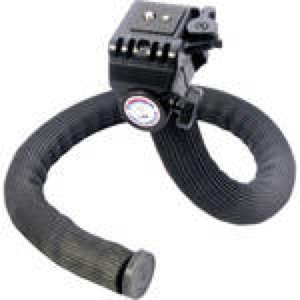 Margolin Development, a developer of technology products for Hollywood’s photographic and motion picture applications, has released the SteadySnake Neck-Pod, which is designed to carry and provide virtually hands-free operation of an iPad, iPhone or most any camcorder or digital camera that weighs three pounds or less.

It rests on both the user’s shoulders and is supported behind the neck to hold your iPhone, iPad, camera or smart device securely and steadily. The SteadySnake Neck-Pod provides virtually hands-free camera support so your hands are used for setting, aiming and shooting, says George Margolin, president of, Margolin Development.

It can also be used to read eBooks, view websites and apps, or watch movies on your iPad, all virtually hands-free. The SteadySnake can change shape to become a monopod for videography  over the heads of crowds or used as a low rider to video subjects close to the ground without bending over.

The SteadySnake Neck-Pod features a built-in 360 degree tripod head and quick release camera attachment. It costs US$79.95 for all point and shoot, DSLRS, and video cameras that weigh less than three pounds. he iPad SteadySnake with its iPad adapter bundle is priced at $94.94. An Apple mini iPad adapter and SteadySnake are not bundled together, but the adapter can be ordered from BandH separately for $19.99. Go to http://tinyurl.com/lzdwyuh for more info.

Next version of Firefox dropping support for Mac OS X 10.4