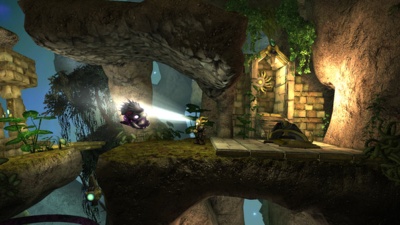 Here’s how the game is described: “Glare is set in an artistically stunning solar system of round worlds where you play as The Shiner, a being of pure light given shape by an ancient suit of armor that is summoned from starlight to heal the sun and defeat the infectious Ramora. A game about discovery, the Shiner travels through the Toric Caster, uncovering new ways to defeat the evil threats of the Ramora and cleanse the corrupted worlds.

“The Shiner’s primary weapons are its glare and a gun. Casting its light will affect certain environmental elements throughout the game, as well as guide the player through each of the worlds. With six planets to explore and cleanse, Glare delivers new weapon upgrades and abilities in each level with increasing difficulty.”

Glare is regularly priced at $14.95. Phobic Studios is offering a 10% discount for anyone who purchases the game on Steam during the first week of launch (Oct. 10-17). The game can be downloaded from Steam at http://store.steampowered.com/app/243140/ and from the Glare website at www.glaregame.com .