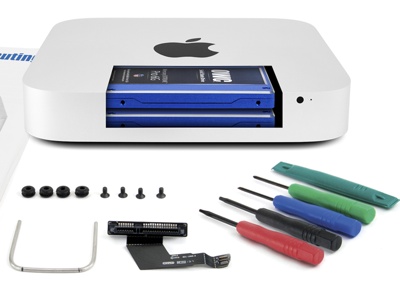 Other World Computing has launched an upgraded OWC “DataDoubler” Kit, which can add a add a new 1.5TB drive, and is compatible with 2011 and later Mac minis. These kits can be purchased stand alone, starting at US$27.99 or specially discounted bundled pricing from the OWC online store.

This DIY kit enables Mac mini owners to add a second internal hard drive and install up to two drives for up to 3.0TB of storage, or add a high-performance solid-state drive (SSD) to complement (or fully replace) the existing internal factory drive. Although OWC recommends its Mercury Extreme Pro 6G SSDs for the 6.0Gb/s SATA-equipped 2011 to current Apple mini, this DIY kit is fully compatible with all 9.5mm or smaller 2.5-inch Serial ATA SSDs, including the largest capacity in the 3G speed class, the OWC Mercury Electra 960GB SSD. For more info go to http://tinyurl.com/6m4rwd6 .

New webcast series focuses on iTunes U implementation and integration