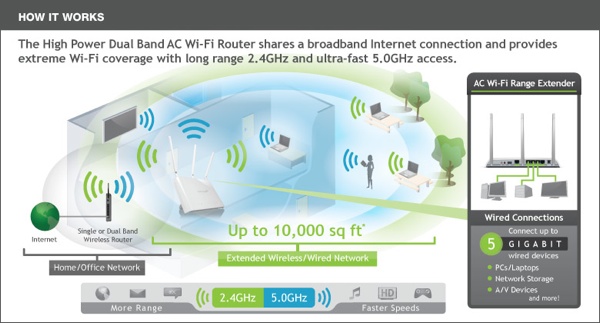 A universal range extender, the REA20 is capable of expanding any wireless network by repeating, amplifying and rebroadcasting signals from any Wi-Fi router. The technology built into the REA20 will allow multiple users to download and stream HD or 4K media to different devices simultaneously without buffering delays. The REA20 delivers speeds up to three times faster than range extenders operating on the previous 802.11n Wi-Fi standard.

The problem with 802.11ac is it operates on the 5GHz Wi-Fi band which has shorter range. With the REA20 Amped was able to boost 2.4 and 5.0GHz performance to cover an entire office, home or backyard and provide the speed and performance associated with 802.11ac for environments with multiple devices such as, televisions, game consoles, tablets and smart phones, all at the same time.

The technology packed into the REA20 gives it the ability to eliminate Wi-Fi dead spots, penetrate thick walls and extend Wi-Fi coverage by up to 10,000 square feet, while streaming media at faster speeds to multiple devices at once. A USB port for file sharing and five gigabit wired ports are built into the device for connecting additional wired devices such as televisions, game consoles, Blu-Ray players and more.