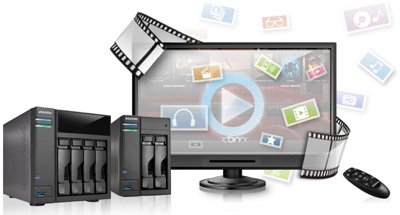 They’re the first devices in their class to come equipped with Intel Atom 1.6GHz dual-core processors along with 1GB of DDR3 memory. The devices in this new series consist of the 2-bay AS-302T model and the 4-bay AS-304T model. All devices boast a wealth of power saving features including internal and external disk hibernation, Night Mode and System Sleep Mode (S3). During System Sleep Mode, only 0.8 watts of power is consumed.

The AS 3 Series was designed with multimedia and home cloud server applications in mind. In addition to its HDMI interface inherited from Asustor’s AS 6 Series, the AS 3 Series features a receiver and 3.5 mm audio jack.

After installing the XBMC multimedia player app from ASUSTOR’s App Central, users will be able to use the HDMI interface to play audio and video from the NAS directly to any HDMI ready display. Further pairing XBMC with the ASUSTOR remote control (optional purchase) will allow users to control all multimedia playback from their NAS.

Additionally, users are also free to play the music they have stored on their NAS by connecting it to USB speakers, utilizing the audio jack or connecting the NAS to an amplifier via HDMI. For more info go to www.asustor.com .

Skydda Design introduces the BambooBook Case for the MacBook Pro