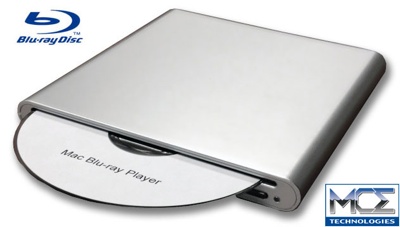 The late Steve Jobs once described Blu-ray as a “bag of hurt.” Guess some of us like the pain — and MCE (www.mcetech.com) makes it possible to view Blu-ray discs on your Mac with its USB Super-BluDrive.

The lightweight, portable, slot-loading drive connects via USB and can play and record CDs and DVDs as well as play commercial Blu-ray movies directly on the Mac with the included software. The USB Super-BluDrive is compatible with all Mac systems and retails for US$79.

It gives Mac users a solid alternative to the Apple USB SuperDrive by providing the same functionality, but with the added bonus of giving users the ability to watch Blu-ray movies directly on the Mac. The MCE USB Super-BluDrive includes Mac Blu-ray Player software for the playback of commercial Blu-ray movies natively on the Mac. Commercial Blu-ray movie playback requires an Intel Core 2 Duo processor running at 2.4GHz, or faster, and at least 2GB of RAM.