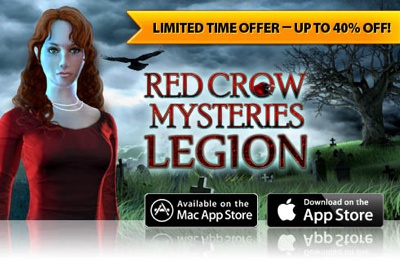 Here’s how the game is described: “You play a ‘gifted’ young girl who wakes to find “something” went horribly wrong. You’re informed by your dead mother’s ghost that you were gifted with special powers that should help you in your battle between good and evil. Now you’ll be tested to prove you are strong enough to defeat Legion. You will need to explore dark and eerie locations to find clues, search for special items and solve tricky puzzles. Pass the ultimate test, defeat the impending threat and preserve the world as we know it.”

“There are three game modes for your choice: easy, casual and adventure. Traditionally, an adventure mode is the most difficult – the hint recharges much more slowly, you cannot skip puzzles, you do not have lists of hidden items and active zones are not highlighted. Whether you are a newcomer to the genre or just want to spend a few hours looking for hidden items and solving challenging puzzles, Red Crow Mysteries is the right choice for you.”

Red Crow Mysteries: Legion is available on the Mac at and on the iPhone and iPad at. The manufacturers suggested retail price of the game is $4.99 on the Mac and iPad and $2.99 on the Phone through June 22. After that the prices will be $6.99 and $4.99, respectively. For more info go to g5e.com .

Cloud-DVR subscribers worldwide will increase to 24 million by 2018