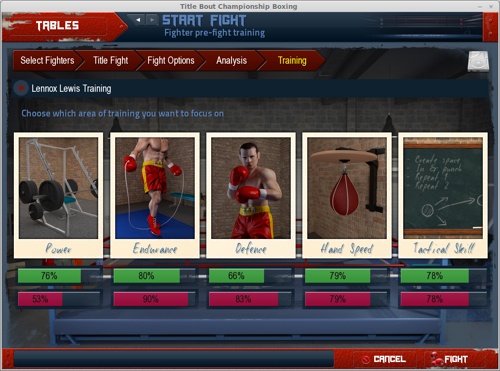 P.I.S.D. has released its boxing simulation, Title Bout Championship Boxing (TBCB) 2013, for the Mac. The game features thousands of real boxers, with the ability to re-stage classic bouts or create “What if?” scenarios, such as pitting Sugar Ray Robinson against Marvin Hagler. TBCB can even be used to forecast upcoming fights.

“Title Bout Championship Boxing 2013 adds many new features, including: enhanced radio-style commentary; more realistic crowd noises; pseudo-animated fighters who throw punches, clinch, and get knocked down; ring girls who parade between rounds; organisational rankings; the ability to import multiple images of each fighter, as well as pictures of famous boxing venues; a revamped auto-scheduling tool; and much more.

Title Bout Championship Boxing 2013 sells for US$19.99 for two licenses, with a $10 discount if the buyer owns any previous version of the game. For more info go to http://www.pisd.co.uk/tbcb .