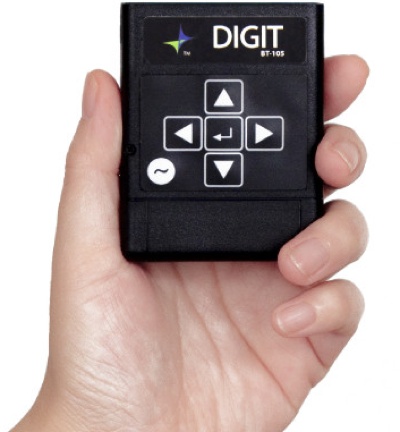 AirTurn (www.airturn.com) has released the AirTurn DIGIT, which the company says is the world’s first wireless remote for iTunes and iOS cameras that combines handheld control with foot pedal compatibility.

Within iTunes, AirTurn DIGIT users can use the handheld buttons to play/pause tracks, navigate between songs in a playlist, and control volume remotely.  With iOS cameras, users can take snapshots or toggle the video camera either with the DIGIT’s handheld buttons or with a connected foot pedal.  The AirTurn DIGIT also features automatic Bluetooth pairing with iOS devices for easy connections and fast page turns, as well as a built-in debounce filter to prevent multiple page turns for each button or pedal press. It works with a growing number of iOS and Android apps as well as standard programs such as Adobe Acrobat, Microsoft Word, PowerPoint and Keynote for Bluetooth-equipped Mac and PC computers.

The standalone handheld version retails for US$79. Two and four pedal versions of the AirTurn DIGIT with ATFS-2 silent pedals retail for $129.95 and $169, respectively. For more info go to http://airturn.com/digit .