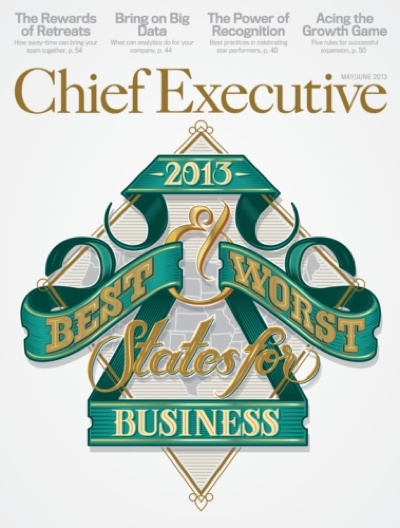 For the ninth year in a row, CEOs rate Texas as the #1 state in which to do business, according to Chief Executive Magazine’s annual Best & Worst States Survey.

The Best & Worst States Survey measures the sentiments of CEOs on a range of issues, including regulations, tax policies, workforce quality, educational resources, quality of living and infrastructure. For the 2013 survey, 736 CEOs from across the country evaluated the states between Jan. 16 and Feb. 14, 2013. Ohio was the biggest gainer in this year’s survey, rising 13 spots from #35 to #22. \

CEOs say California’s poor ranking is the result of a perceived hostility to business, high state taxes and onerous regulations, all of which drive investment, companies and jobs to other states. According to the California Manufacturers & Technology Association, California accounts for 12.6% of total U.S. GDP, but only has a 2.2% share of investments in new and expanding manufacturing sites.

“When you investigate acquiring businesses in some of the states rated poorly for business conditions, the anecdotes all wind up being true,” says Kevin Hawkesworth, President & CEO of Florida-based Shaw Development. “The horror stories about these states are real.”

“California, Illinois and New York are simply awful states to operate facilities or employ people,” according to another CEO. “We will do almost anything possible to minimize our exposure to these anti-business environments.”

A common theme among CEOs is the burden of constantly changing regulations.
“Business is too hard without dealing with piles of regulations that are constantly changing,” says Rick Waechter, CEO of Boston Magazine. “I believe there have to be controls, but keep them simple and straightforward — and most importantly, don’t make it a moving target.”

“CEOs continue to tell us that California seems to be doing everything possible to drive business from the state. Texas Governor Rick Perry, by contrast, personally makes it his mission to lead corporate recruitment and economic development efforts in his state,” says J.P. Donlon, Editor-in-Chief of Chief Executive magazine and ChiefExecutive.net.