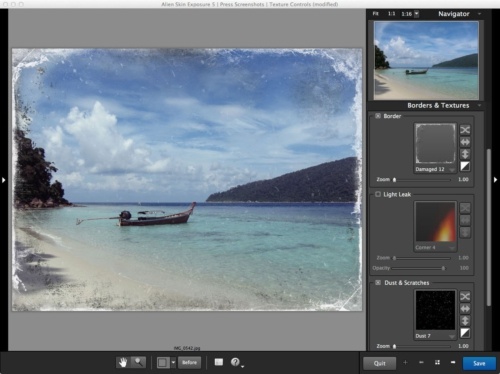 Exposure 5 brings many of the creative tools of traditional film photography to the world of digital, such as the look of discontinued films, darkroom tricks, and trendy lo-fi camera quirks. Popular classic films like Kodachrome, Polaroid and even Panatomic-X are accurately simulated.

Hundreds of preset effects can be applied with a single mouse-click. Exposure 5 includes both Color and black-and-white processing so there’s no need to switch between tools.

The entire user interface of Exposure 5 has been redesigned with productivity in mind. A darker theme reduces distractions around the photo and matches other popular tools. The preset and editing panels can be hidden, to further remove distractions and allow more room for the photograph. The new visual preset browser shows how each preset will look when applied to an image. Users can see many presets at once, for quick exploration. In addition, favorites and recently used presets are just a click away.

Exposure 5 includes many new textures for a greater variety of vintage and Lo-Fi looks. There are now separate controls for adding borders, dust & scratches, and light leaks. A new randomize option allows a user to explore multiple variations on a particular look.

Exposure 5 integrates with the popular tools many photographers use in their professional workflow: Adobe Photoshop, Lightroom and Apple Aperture. It can also be launched as a standalone application, which is useful for fast batch-processing or as part of a workflow that includes tools that don’t support plug-ins.
To help users get started and for advanced techniques, the Alien Skin website has a library of tutorial videos and example images.

Exposure 5 will be available in June 2013 through www.alienskin.com for US$199. Owners of any version of Exposure may upgrade for $99 USD. Free upgrades will be automatically sent to everyone who purchased Exposure 4 directly from Alien Skin Software in March 2013 or later.

Five innovations that will change our lives, part one: 3D