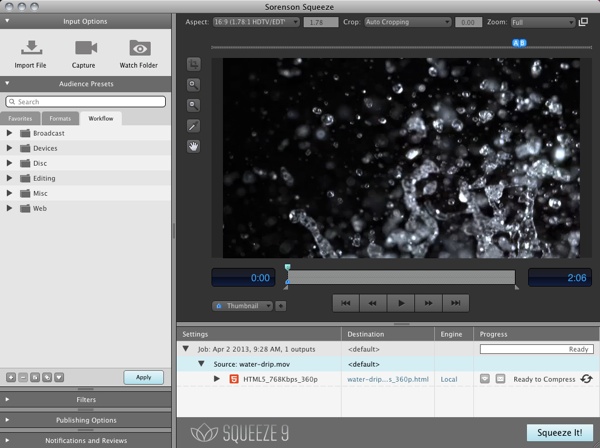 Sorenson Media has released Sorenson Squeeze 9, an upgrade of its video encoder that improves the encoding workflow and optimizes multi-screen video encoding.

Benefits of the newest version of Squeeze include industry-first HTML5 optimization; an enhanced, more intuitive streamlined user interface and optimized user experience; enhancements to video quality and speed; and improvements to the product’s review and approval functionality.

According to Mitch Holyoak, vice president of engineering for Sorenson Media, says Squeeze 9 makes encoding video files for playback in HTML5 easy and intuitive. Users simply drag and drop a single HTML5 preset onto a source file, and Squeeze then automatically creates two output renditions of the file — one in MP4, the other in WebM — together with a coding of the video onto an HTML5 web page, using the video tag. The two renditions enable native video playback in all major browsers, including Safari, Chrome, Internet Explorer, and Firefox.

“HTML5 is growing in popularity across the Internet and our users have been asking for ways to simplify the optimization of video for the various browsers and multi-screen delivery,” says Holyoak. “With Sorenson Squeeze 9, our primary goal was to innovate the overall user experience by stripping away barriers to a streamlined workflow, so that video professionals can forget about transcoding, and instead focus on their craft of video creation.”

A video walkthrough of the new features is available at
http://sorensonmedia.com/new-in-squeeze-9 .

Squeeze 9 also includes enhancements to the user interface (the first major UI update since version 6 in 2009), which work together to streamline the workflow interactions and processes within Squeeze. The UI improvements include:

° The ability to more easily search for any item — including presets, filters, publishing options and notifications;

° Improved publishing workflow — enabling the ability to preview content before publishing, and changing settings after encoding and republishing;

° A video preview window organized for the most simplified, intuitive task areas for viewing and editing source content;

° An updated plug-in for Adobe Premiere CS6, which provides seamless encoding from within the latest version of Premiere (and add-ons to plug-ins Squeeze already supports for every major professional non-linear editing application, including those offered by Avid, Apple and Sony).

Another workflow improvement in Squeeze 9 is video stitching. This new version enables users for the first time to add pre- or post-roll video to any primary video. This enables more efficient workflows, especially with regard to appending ads of all types to source material passing through the encode phase of production, says Holyoak..

Other improvements in Squeeze 9 include:

° Enhanced quality through integration with the newly optimized MainConcept SDK 9.6 codec, which provides improved encoding quality with H.264 and AVCHD 2.0.

° “Divide & Conquer” encoding for MP4 and MOV, which provides a boost to single-file encoding. Squeeze 9 is optimized for MP4, QuickTime (MOV), WebM and Matroska (MKV). It features a parallel processing system that breaks decoded video files into content chunks and partitions them across multiple CPUs, to achieve processing speeds that are on average twice as fast as Squeeze 8. Adaptive bitrate encoding (HLS, Flash Dynamic, Smooth Streaming and MPEG-DASH) employs the same parallel approach, with similar performance enhancement.

° An upgraded review and approval process empowers users with even more responsive design of web pages for viewing and approving video content on any device.

Sorenson Squeeze 9 is now available for US$799 in the Standard edition, $999 for Squeeze Pro, and at various upgrade prices for past versions of Sorenson Squeeze at http://www.sorensonmedia.com/upgrades . All Squeeze 9 customers receive full, free use of all Sorenson 360 features for Review and Approval. Additional storage capacity and other enhancements are available as upgrades.