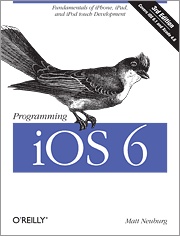 If you’re an iOS developer who needs a little polishing on the fundamentals of Cocoa Touch, you’ll want to reach “Programming iOS 6, 3rd Edition” from O’Reilly Media.

With this revised and expanded edition, readers will dig into Cocoa and learn how to work effectively with Objective-C and Xcode. “Programming iOS 6, 3rd Edition” by Matt Neuburg (@mattneub) covers iOS 6 in an orderly fashion and is targeted to both those who are approaching iOS for the first time and those who need a reference to bolster existing skills.

° Understand the anatomy of an Xcode project and all the stages of its lifecycle;

° Learn how views and layers are managed, drawn, composited, and animated;

° Become familiar with view controllers and their relationships, along with nib and storyboard management;

° Delve into Cocoa frameworks for sound, video, sensors, maps, and other features;

° Touch on advanced topics such as threading and networking.

Neuburg has a PhD in Classics and has taught at many universities and colleges. He’s been programming computers since 1968. Neuburg has written applications for Mac OS X and iOS, is a former editor of “MacTech Magazine,” and is a long-standing contributing editor for “TidBITS.”

Handwrytten takes the work out of letter writing