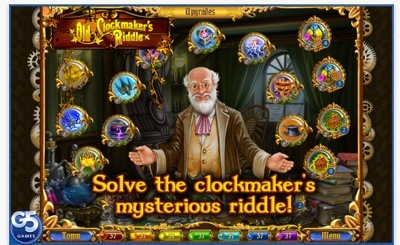 Old Clockmaker’s Riddle, from G5 Entertainment & Dava, is now available for Mac OS X — and iOS users can enjoy the match-three puzzle game in a full version, as well.

Here’s how the game is described: “Life changes instantly in a small country village when the town’s massive clock tower suddenly stops working. The place suddenly falls into decay. Intrigued by the riddle of the dying town, you head on an adventure to help the city. You’ll play over 50 tantalizing levels to remove the curse and return the town to its former glory. Mr. Ryan, who lives in the only intact house, will help you unfold the story and make useful tools for you to progress in the game.

“You need to drag and swap shining gems to make a match of at least three in a row and reveal a proper number of clock hands to restore one of the destroyed buildings. There are obstacles and bonus gems aplenty, as you’ll encounter pieces that can be swapped by frozen pieces. Frozen parts will simply fall to the bottom of the screen, and even locked pieces won’t move until a match is made containing them.

“Just as there are obstacles working against you, so too are there power-ups that help you out, like arrows that wipe out whole rows or columns of gems, lightning bolts, and bombs that remove small sections of gems. here are two game modes: relaxed and timed so both beginners and advanced casual game fans will enjoy the gameplay.”